We are proud to present the only definitive and comprehensive study of the history and genealogy of Clan O'Byrne, in all its septs and branches. This site is not a "hard-sell", it is important that this valuable resource is properly described and made available to all, but please remember that the titles described are all available for reference through the major copyright libraries, including Trinity College, National Library of Scotland and the British Library. To get a flavour, try googling the first title - you will find that you can access quite a lot of the text and see for yourself. 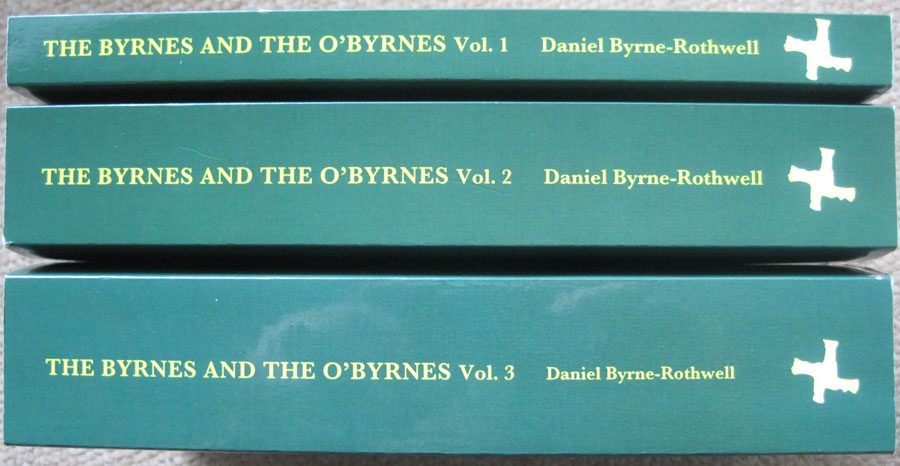 House of Lochar is a small, independent publishing company which has extended its activities into Irish genealogy pro bono publico. The volumes in the series featured here are the result of detailed research and are essential to any study of this important Irish family name: Byrn, Byrne, Byrnes, O'Byrne, O'Byrn, Bryn, Burn, Burne, Burnes, Burness, Burns, O'Burn, O'Burns, Bourns, Bourne, Bournes, Beirn, Bern, Bierne, Borne etc. There are many examples of the name in Ireland, and it is known by DNA studies that different persons bearing any form of the name may be descended from common or quite different ancestors. Naturally enough, the renowned Wicklow clan features heavily in the work, but the research involved covers every known example of this patronymic.

The background to the series

Some years ago, Paul J. Burns generously agreed to share some notes from his personal research, which were published in 2001 by House of Lochar as The Clan O'Byrne of Leinster AD 400 - 1700; this little booklet of only 60 pages is still in print and provides a handy introduction to the subject. (You can buy a copy if you follow the following link, but please come back to this page afterwards http://www.houseoflochar.com/books/gen_obyrne.htm ). Subsequently, Paul devoted himself to an ambitious DNA project which has been outstandingly successful - it has exploded old myths, has revealed fascinating insights into ancient trading patterns and connections and it has established a very strong foundation for future research. The project is open to new entrants, whose contribution will be of real value to all concerned see http://www.worldfamilies.net/surnames/byrne/results. The chart on that page is impressive but needs interpretation, so navigate to the Project Homepage and take it from there. Do explore the whole site and maybe consider participation - maybe a confirmed family group of siblings could share the cost of sponsoring just one male sibling to represent them all?

Meanwhile, other individuals devoted themselves to historical research... one such researcher has concentrated on Armorials, the coats of arms, crests and mottos used by different Byrne and O'Byrne families. Daniel Byrne-Rothwell, Paul J. Burns and Nicholas C. Burns collaborated to produce a One-Name Sudy, which is published as Volume Three of the series featured here. Daniel Byrne-Rothwell, Paul J. Burns and Shaun E. O'Byrne collaborated in the fourth and final volume of the series, published in 2015.

Such ongoing research concerns all variants of the Byrne and O'Byrne name, which originates in Ireland but which is not restricted to any one county or sept. This site and its content has no hidden agenda - there is no intention to show that any one branch of the name is older than any other, or has precedence, or that any given descendant is a chieftain or has heraldic rights or anything else. The project is entirely devoted to genuine research and to the publication of vital source material of interest to researchers and geneaologists. We have provided a Forum so that additional snippets of information or family lore can be readily shared.

The Byrnes and the O'Byrnes by Daniel Byrne-Rothwell

As part of this international effort, historian Daniel Byrne-Rothwell completed work on Volume 1 of "The Byrnes and the O'Byrnes" in 2008 and Volume 2 appeared in 2010. Volume 3 was published in 2012, co-authored with Paul J. Burns and Nicholas C. Burns, and Volume 4 was published in May 2015, to complete the series. These volumes are of extraordinary value and they are described in detail on this site; because they are so exhaustive they are necessarily quite large and the cost of postage is high - it is for this reason that this entire site is devoted to careful descriptions of each volume. The authors and publishers are united in their wish to make the collated information available to all who would wish to have it - but this is not undertaken as a commercial exercise. We give honest and extensive information on this site, and prospective purchasers can also refer to the physical copies which are held by National Library of Ireland (Dublin), The British Library (London), National Library of Scotland (Edinburgh), Bodleian Library (Oxford), Cambridge University Library, Trinity College Dublin, and National Library of Wales (Aberystwyth). The cover of the fourth and final volume is reproduced below:

The Byrnes and the O'Byrnes: Volume 1 Volume 2 Volume 3 Volume 4 Purchase

Incidentally, most of us will quickly discover a host of other Irish family names with which we are connected, See http://ireland-calling.com/irish-names/